You are here: Home / Weekend Edition / Say It In Song / I Have a Dream

I Have a Dream 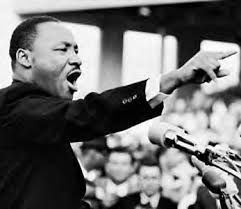 In this presidential election year in the United States, I believe this dream is possible. We will never have, nor should we ever have, 100% party control. What is needed from our political leaders is an understanding that they have an awesome responsibility to the people of this nation and to the world.
My dream also involves political leaders coming together, cooperating, and having a common goal to make this nation greater for the people they serve. When political lines get in the way of positive change for a nation, nothing can be accomplished.

My dream will begin to take hold when there is change in how politician’s view their role in our government; when they recognize we elect them to cross party lines to accomplish great things.

Dr. King showed us what was possible; he started to create the path for us to walk down together. Let’s be mindful of the power of people coming together to make great things happen this election year.

To honor Dr. King, and lasting positive change he made on our nation, here’s the U2 song “MLK:”

Kelly is a writer, photographer, social media consultant, and teacher. She is all over the internet, including her blog Naked Girl in a Dress

U2’s “MLK” is a song to honour Dr. Martin Luther King, Jr. It is the tenth song from their 1984 album, The Unforgettable Fire