You are here: Home / We Say This / Rio +20 and the Problem of Global Action

Rio +20 and the Problem of Global Action

The United Nations Conference on Sustainable Development, aka Rio+20, is happening right now, and as usual there’s a storm of opinions flying around the internet. The conference is a converging place for activists of all stripes concerned about environmental issues, and everyone has a different perspective on how we’re going to address the world’s problems. So of course, it’s a mess. 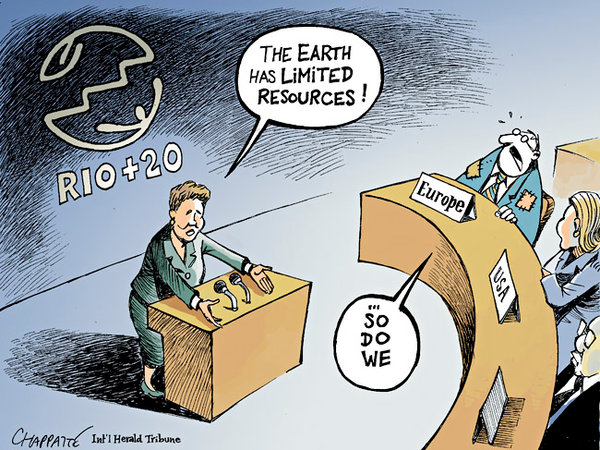 Image from the NYTimes

At the 1992 Rio Earth Summit, countries signed the Convention on Biological Diversity and committed to Agenda 21. The Convention, which aimed to conserve biodiversity, sustainable use of resources, and the “fair and equitable sharing of benefits arising from genetic resources,” was signed but not ratified by the United States (though it was entered into as a legally binding agreement by 193 other countries). Agenda 21 is an action plan for sustainable development, and in the United States it is hotly debated. The Republican National Committee passed a resolution claiming, “the United Nations Agenda 21 is a comprehensive plan of extreme environmentalism, social engineering, and global political control.”

If the beginning of Rio +20 and the RNC resolution have revealed anything, it’s that the old environment vs. the economy debate is still going strong. When the RNC sees any sort of environmental action as a conspiracy against economic growth, I’m tempted to call up those leaders and ask them if they remember Econ 101. In every economics class I’ve taken, pollution and other forms of environmental destruction are the primary examples used to explain negative externalities and stilted economic growth.

But with the costs of education soaring, refresher courses are probably out of the question. So what can be done? Again and again I find myself inspired by the incredible steps community leaders are taking in the face of intimidating global issues. The international climate change organization 350.org ran a campaign on Monday calling for the end of fossil fuel subsidies, and it was quickly picked up by the leaders of the Rio +20 conference. You can check out the story of that campaign here. But there plenty of other stories I think are even more inspiring: stories of people facing much more adversity and taking larger risks than retweeting #endfossilfuelsubsidies (as effective as that may be). Kenya’s Greenbelt movement is one, as is Vandana Shiva’s work on bioethics.

Indigenous people also came together at Rio +20 to present, “Indigenous Peoples Global Conference on Rio +20 and Mother Earth,” a document that elegantly lays out many of the intersecting issues contributing to environmental and social justice issues today.  Like I mentioned before, a lot of the environment vs. the economy debate is actually answered by Econ 101: if (in a capitalist economy) the price mechanism doesn’t fully capture the costs of an action, there are going to be externalities. As a generalization, we in the United States enjoy a higher standard of living and more wealth because the true costs of our actions are born by people in developing countries or by marginalized populations of people within our own country.

The Indigenous Peoples’ document presents a different view, one that I am sympathetic to as well. It reads,

“The Green Economy is nothing more than capitalism of nature; a perverse attempt by corporations, extractive industries and governments to cash in on Creation by privatizing, commodifying, and selling off the Sacred and all forms of life and the sky, including the air we breathe, the water we drink and all the genes, plants, traditional seeds, trees, animals, fish, biological and cultural diversity, ecosystems and traditional knowledge that make life on Earth possible and enjoyable.”

So yes, the conference is a mess and everyone has different ideas. But people are taking action, and I find that inspiring. Ultimately, it looks like the general consensus within every nation (except the U.S.) is that we are facing an environmental crisis. And if the first step to solving a problem is admitting that we have one…well, I’m going to find the silver lining where I can.

Filed Under: We Say This Tagged With: Climate Change, Environment, Republicans, Rio+20