You are here: Home / We Say This / Mea Maxima Culpa: Goodbye, Il Papa

Waking up Monday morning, having enjoyed a beautiful breakfast with my lovely wife, Erica, I retired to the office to get caught up on my second morning ritual: social media stalking. As I browsed my newsfeed on Facebook, reading status updates from both liberal and conservative friends alike, I came across a shocking piece of news from my friend, Amanda:

“They say Pope is resigning…is that even allowed?”

Needless to say those words woke me up faster than any caffeinated beverage ever would!

It’s all true and still making shockwaves through the mediascape as we speak: Cardinal Joseph Ratzinger, aka: Pontifex Maximus Benedict XVI, Bishop of Rome and Overseer of the Holy See, Wearer of the Pointy Hat and the Red Prada Pumps, announced Monday morning via a statement during an canonization ritual in Vatican that he would be effectively “renouncing” his Papacy on February 28th.  In the statement, the Pope summarizes his intent to resign as follows:

[I]n today’s world, subject to so many rapid changes and shaken by questions of deep relevance for the life of faith…both strength of mind and body are necessary, strength which in the last few months, has deteriorated in me to the extent that I have had to recognize my incapacity to adequately fulfill the ministry entrusted to me. 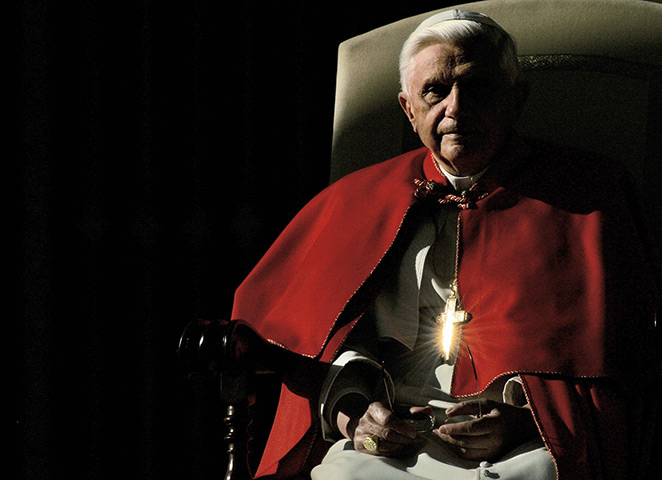 Am I retiring a disgraced Pontiff? Is the Pope Ca–oh, wait…

While exceedingly rare for a Pope to resign, the majority expiring in office due to natural or unnatural causes (and in some cases, unknown), the most recent example we have of Il Papa stepping down comes from over 600 years ago when Gregory XII resigned during a disgraceful period of Church History known as the Great Schism where there was not one, not two, but THREE Popes vying for followers all while subsequentially  excommunicating each other. It can be argued that Benedict leaves a Church in similar shambles, weakened by inside power grabs, a sense of being both above the law and morality, and largely becoming irrelevant in an ever-changing world.

While my wife and featured writer, Erica, has outlined her own particular views of non-belief, I can say honestly I was never so unburdened spiritually. Growing up in an Italian-American family, life was peppered with excursions to Sunday morning Mass, rosary recitations with grandmothers, singing in church choirs, and explaining to priests exactly what you did with that Sports Illustrated Swimsuit Edition in your annual Reconciliation meeting (just as a note to non-Catholics: we stopped calling it “Confession” years ago). Catholicism was (and still is) a major part of my identity, whether it’s crossing myself before some major challenge, or yelling “Jesus, Mary, and Joseph!” when something goes missing and I’m already late for a piano lesson.

That being said, the election of Benedict soured my relationship with the Church. I think it was watching Meet the Press after his appointment, and hearing the then-cardinal’s own words on how the church would need to purify itself, even to the point becoming a band of “small, seemingly insignificant groups” that “struggle against evil.” This was not the “Gospel” of inclusiveness I heard preached from pulpits of my home churches from liberal-minded priests and nuns. It was this mentality that removed a beloved priest from our church for the sin of being to progressive, and banishing him to the netherworlds of the Diocese of Richmond.

I won’t hold against Ratzinger his involvement in the Hitler Youth, since there are many damnable things societies have done on our behalf and hindsight is 20/20. Neither will I hold up his highly media-friendly predecessor as some sort of saint (though technically he is beatified), since he held many of the same conservative views on contraception, homosexuality, and women in the priesthood as Benedict. Neither will I hold some of his most asinine proclamations against the Pontiff, including rib-ticklers such as reading Harry Potter will put you on the slippery slope to Satan-worship or that men who couldn’t have sex, if their natural inclination was to have sex with men, should resign from the priesthood and all its not-having-sex immediately.

Yet, it is this trajectory towards a less inclusive, more conservative faith that has drawn me away. It is because of Benedict XVI and others in this power structure I am no longer a Catholic, and though I may find beauty and meaning in the ancient rituals of the Church–especially the great musical traditions—I cannot return to the simple faith of my childhood, not while it remains in a state of atrophy.

When corrupt men can commit unspeakable acts against children, both here and around the world, and use a vast network to shuttle these men away from their victims until the next incident; when a hell-bent philosophy on human sexuality keeps missionaries from passing condoms out to AIDS patients in Africa out of some belief that the innate right of seminal fluids outweighs those of countless mothers, wives, and children in poverty; when the realization that the type of genitalia one has is not a prerequisite for leadership and that amid declining clergy, married, female, and gay priests may be the only thing keeping the religion afloat; the One, Holy, Catholic and Apostolic Church is on its way to having as much significance in today’s society as Mt. Olympus and the Oracle of Delphi.

So, so long Joey. Enjoy your retirement. Don’t let the door hit ya where the Good Lord split ya!

Filed Under: We Say This Tagged With: Pope Benedict XVI, Roman Catholic