In the middle of a week that can only fall under the category of our founder’s favorite phrase —sequestration, an allegedly semi-divine pontiff resigning, sinkholes in Florida, massive Winter Storms from Maine to Virginia, these still do not merit the title of “What the living f*ck!?”

It’s when the first American guest of the last holdout of Stalinesque brutality and Leader Worship is a seven-foot, cross-dressing former NBA star.

While we at Borderless News and Views take no issue with those who wish to follow an alternative lifestyle (and, if you do, take it up with Mrs. Vera), it is surprising that the oft-vilified communist regime and current rabble-rouser North Korea, along with its diminutive dictator Kim Jong Un (someone we barely knew existed a few years ago), would invite the flamboyant and always controversial Dennis Rodman as their first American guest.  Rodman, as power forward for the Chicago Bulls during the 90s, alongside greats Michael Jordan and Scottie Pippin, made as much news off the court for his paparazzi-fueled antics as his electrifying play did on the court. While his style both on and off the court are to be noted, his role as ambassador to one of the world’s worst leaves a little less to be desired.

Perhaps even more audacious than the visit was the follow-up debriefing by This Week’s George Stephanopoulos, which can only be described as theater of the absurd. For those who have been under a rock (and I’d suggest you stay there) please watch the video for yourself here, we’ll wait for you to get back. 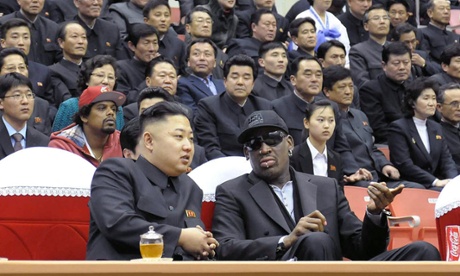 For those at work or who just didn’t have the patience to watch this drivel, let me recap.  Stephanopoulos, in a rare instance of a Sunday Morning Show host actually pushing his guest, cites North Korea’s atrocious human right’s record via Human Rights Watch (which you’ll find conveniently posted here), as well as recent statements where North Korea, in an attempt to balk at the international community, has continued their nuclear weapons research and declared the United States the “sworn enemy” of the communist regime.  Rodman, decked out in blazer screen-printed with dollar bills (anyone else get that irony?) and clearly having not done his homework, rambles on about how Chairman Kim is “humble,”  “a great man” and “only a kid.”  When confronted with fact that there are over 200,000 political prisoners in forced labor camps, Rodman quips with “Well, you know, guess what, isn’t it amazing how we do the same thing here?”

We’ll give Rodman a point for that, since our incarceration rate is the highest in the world, and the fair execution of the law, especially among minorities, is questionable. So far, Rodman’s got a free-throw in at the end of the buzzer while the normally reserved Stephanopoulos is banking three-pointers from the top of the key.

Perhaps the most absurd exchange is where Stephanopoulos, maybe in a moment of pity, asks Rodman to clarify calling Kim and his predecessors Kim Il Sung and equally eccentric Kim Jong Il “great leaders.” Rodman responds by noting how he “saw people respect him and his family.”

“Aren’t they forced to?” Stephanopoulos replies.

Stephanopoulos had to repeat the question.

If you’re not aware that in a Cult of Personality, one of the tenets is that the people are FORCED to show love and affection to the Leader, you are clearly either not from this planet, or you might want to consider a crash course in said regime’s history before you put your RSVP in the mail.

The whole point of this exercise in futility was for Rodman to serve as a proxy ambassador for Kim, and to tell President Obama to give him a call because he “does not want to do war.”  Rodman, the clever arbiter he is, points to both Kim and Obama’s love of basketball as a possible point to open a dialogue between the two adversaries.

Yes, using the old “find something you both have in common” tactic your mom told you when you had a bully at school. I guess maybe if Hitler and Churchill had started peace negotiations with their shared mutual interest in painting, maybe we could have avoided World War II. Hell, Obama admits that he shoots skeet “all the time” at Camp David; we even have the pictures to prove it. Maybe he and Wayne LaPierre can let bygones be bygones and stop claiming that universal background checks will lead to massive gun confiscations by the U.N.

At the beginning of a month that can only be described as “March Madness,” Rodman’s trip and painfully-comic interview with Stephanopoulos garners the title this week of “What the Living F*ck?!”