It’s sinking in…This past Wednesday, May 29, 2013, somewhere around 3:00am, Michele Bachmann’s Political Career went home to be with its Lord, the Fox News Republican Strategy Desk; its life cut tragically short at 13 years old. 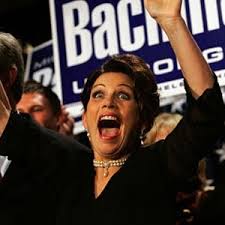 Of all the things we shall miss the most, it will be the crazy eyes…

Bachmann’s Career was born to humble beginnings  January 3, 2001 in the Minnesota Senate, when an upstart lawyer, Christian “counselor,” and Swiss National Michele Bachmann decided that rather than attempting to condemn one homosexual act at a time, she could just create a state amendment condemning the whole lot. While she failed to pass ballot referendums in both 2004 and 2005, later attempts to protect marriage rights in Minnesota ultimately proved successful.  She also showed initiative by being appointed Assistant Minority Leader, a position she executed with such competence they relieved her of service a year later.

But Minnesota was too small for Bachmann’s Career. She knew there was a land out there called “Real America” where they espoused her views of massive tax shelters for the wealthy, mistrust of brown people with guttural consonants, and causal discrimination of gays, immigrants, and women. It was with this ambition that catapulted Bachmann’s Career to the U.S. House of Representatives in 2006, riding the wave of an anti-war Democratic Majority, much like a jellyfish that was washed ashore only to sting you on the thigh.

But it wasn’t until the nomination of the first Kenyan Half-blood Dictator/Antichrist that Bachmann’s Career really took off. In an appearance on the Satanic den of MSNBC’s Hardball, Bachmann called for an investigation of “Dark” Sith Lord Obama and his Congressional Democrat henchmen for what she called “un-American” activities. It was this statement, along with her Palinesque-like qualities of being mildly photogenic yet extremely right-wing as well as the election of said-Antichrist in 2008, that engendered her to a group of middle-aged, upper-middle income, accidentally-racist white folks who hung teabags from tricorn hats and wanted “Gub’mint” to get their damn hands off the federal program Medicare.

It was in throes of Tea Party Mania and Misinformation Bachmann’s Career thrived. Through the warm glow of television screens tuned into Fox News she spoke to social commentator and Civil Rights Leader Glenn Beck of encroaching government tyranny.  Her popularity led to her famous Newsweek cover, where she showed the world that, yes, a vacant, intense stare was the new “bedroom eyes.”  She even brought those crazy eyes out again for the first Tea Party Caucus State of the Union Rebuttal in 2011, where she blazed a trail for staring slightly off-camera for six-and-a-half minutes.

But it was not enough for Bachmann to be the de facto (ie: self-appointed) Tea Party Leader in Congress or the “Queen of Rage” (“Rage” being the capital of Real America), she wanted more.  She wanted Real America to really be America.  And it was with a narrow, draconian Christian faith and a desire for a governmental system big enough to fit in a Brooklyn studio apartment that Bachmann’s Career sought its greatest ambition: the American Presidency. Major news outlets such as Fox News and even Fox News predicted a major victory for the Tea Party favorite. This was confirmed by Bachmann’s smashing victory in the 2011 Iowa Straw Poll, an unofficial tally of the most conservative Iowans who had nothing else better to do.

Then, a year later, tragedy struck when Candidate Bachmann received 5% of the votes in the Iowa Caucus, beat out by a functional retard, your crazy uncle, Guy Smiley, and a man unfortunately named after the by-product of homosexual intercourse. Bachmann, showing her resilience, resigned the next day.

It’s here where Bachmann’s Career takes a sad, E! True Hollywood Stories turn for the worse. After a fairly good rump-thumping in the 2012 election, the Tea Party brand just didn’t have that new grassroots smell. Sure, there were embassy attacks that had to be investigated and firearms awaiting confiscation by a shadow one-world government, but it didn’t have the same luster of an Obamacare death panel with its creeping European socialism.  Then came news that Bachmann might be in a closely competitive Congressional race in 2014 and that the FEC investigated and fined her for misappropriation of donations of over $200,000 (one can only assume for the doggie sunglasses life partner Marcus bought for their photosensitive schnauzer).

With things looking bad, Bachmann’s Career did the unthinkable. On the night of May 29th, it checked into Twin Cities Motel 6, with a Bible, a fifth of Cuervo, and a shotgun easily purchased thanks to the gunshow loophole.  Reports came from hotel staff that someone or something was screaming “Obamacare!” over and over again until a shot rang out that pierced the dead of night. When authorities came upon that gruesome scene that morning, the only thing they found was an eight-minute ramblingly incoherent suicide note that was immediately uploaded to the Bachmann Congressional page.

While we grieve over this loss for Right Wing Nutjobs and incidental comedians everywhere, we all knew it eventually had to come to this. Bachmann’s Career was one of those shooting stars that burn with hot-white intensity for but a brief moment, only to fade as quickly as they arrive (another analogy comes to mind about a “pan” or a “flash,” but I can’t remember it off the top of my head). But we need to remember that though her political career may be gone, her batsh*t insane rhetoric will live on in minds and pie-holes of Ted Cruz, Ken Cuccinelli, and Alan West.

For those of you currently grieving, just remember that old adage: “Old Republican Political Careers never die, they just end up signing a six-figure deal to host an opinion show on the Fox News Channel.”  It worked wonders for Mike Huckabee’s Political Career!

So, Bachmann Career, Requiescat in Pace. Thanks for the memories, and the laughs.